TamTam gong is one of the most popular gong models. Used worldwide, the beautiful and very imposing gong inspires not only with an impressive appearance, but especially with a very powerful sound. The TamTam Gong can be used as a musical instrument for soft and quiet sounds, but also offers a spectrum of very loud sound nuances. This is what makes the TamTam gong so special: its versatility and its beautiful design, which fits perfectly with our traditional idea of a gong.

The TamTam Gong (often spelled Tam-Tam Gong) is also frequently referred to as the Chinese Temple Gong in European countries. In the Asian region, on the other hand, the TamTam Gong bears the name “Chao Gong”. But even if the gong as a musical instrument has a different name worldwide – its reverberating sound speaks the same language in every country.

The history of the TamTam Gong

The TamTam Gong has a long history that began many centuries before Christ. The oldest model of a TamTam gong found so far comes from China – it dates back to about the 7th century BC. Beyond China’s borders, the TamTam Gong was able to spread rapidly throughout the entire, East Asian region due to its impressive sound and beautiful appearance. At that time, it was common in China to assemble entire orchestras, all of which played music with melodious metal discs – today’s gong. Especially during rituals, celebrations and other occasions, the playing of various gongs was an integral part of the proceedings, as various excavation works could prove. This still shows us in the here and now how important the role of the TamTam Gong was in the Asian region even back then.

In the course of time, however, the TamTam Gong also found its way to Europe. The background of this is not exactly known. However, it is believed that with the Turkish wars in the 17th century, the now much more developed form of the TamTam gong reached Europe. It was used only for certain occasions – especially funeral ceremonies. In the course of time, however, the social importance of the TamTam gong increased more and more, so that it was finally played as a fixed component in orchestras for the first time at the beginning of the 20th century. The special feature: the tam tam gong allows a much deeper and firmer sound than other instruments and can thus give the orchestra a completely new direction. In the process, the variety of sounds changed with each object used to strike the gong – and the gong became an extremely versatile component of the orchestra. Even today, the gong is widely used in the professional, musical field. Due to its relaxing effect and pleasant vibrations, it is also increasingly used in therapeutic and private environments. Learn more about the history of the gong in our blog post.

Beautiful appearance and appealing sound – this is the TamTam Gong

Hardly any gong has such a powerful sound as the TamTam gong. The extremely imposing sound is based primarily on a very well thought-out combination of materials and form, which together make up the intensity of this TamTam instrument. The tam tam gong is a so-called flat gong, which in most cases is made of bronze. 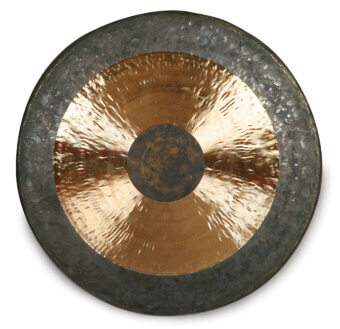 On average, the diameter of a classic TamTam gong is 100 to 150 centimeters, but in isolated cases throughout history larger gongs have been developed. The TamTam Gong is characterized above all by the fact that the edge, which is also visually clearly defined, has been slightly bent over so that a particularly strong and imposing sound is produced. The disc of the TamTam instrument usually hangs on a metal stand and is attached to it with various ropes. This allows the gong to vibrate almost freely and achieve particularly beautiful and harmonious pitches.

How is the TamTam Gong struck?

If you want to play TamTam Gong, you will of course need the appropriate tools. The good news is that the TamTam instrument can be played with both a gong mallet and a gong driver. So you have the choice of which beautiful tones and nuances you want to realize on the gong instrument. Nevertheless, it also depends on the choice of the right mallets or gong drivers. We at ollihess have developed some products especially for the TamTam Gong, which make the impressive sound of the gong possible in the first place.

The perfect gong mallet for the TamTam Gong

Ideally suited for this: The professional gong Mallet L460, which is also ideally suited for larger TamTam gongs due to its above-average dimensions. With the perfectly tuned and shaped felt head, the Professional Gong Mallet L460 by Olli Hess brings out the best possible sound. At the same time, the very soft material ensures that annoying impact noises are avoided and a very pure and unadulterated sound image is created. The warm and earthy tones produced on the gong with the professional gong mallet L460 from ollihess are the basis of a harmonious sound play that will take you through all facets in the world of gongs. If you decide to use the TamTam sound chime with a mallet, the main result will be very deep and vibrating tones, which are ideal for sound meditation.

Playing the TamTam Gong with the Gong Driver

Alternatively, you can of course use a gong driver to play the TamTam Gong as an instrument. This creates much lighter tones, which of course sound a bit more harmonious, but less hypnotic and sensual. Our gong drivers from the Lava Edition, for example, are well suited for sound play with the TamTam gong. Their soft rubber head prevents impact noises as far as possible and leaves no marks on the gong due to its very soft surface. The gong drivers from the Lava Edition are handmade from pure natural rubber and are, like all our products, particularly durable.

Differences between TamTam Gong and other Gong Instruments

From the first gong variants, many gong types have developed over the centuries. The TamTam gong falls into the category of flat gongs, which are characterized by their flat, slightly wavy or somewhat curved plate. In addition to the TamTam gong, the Feng gong is also a classic flat gong, but its flanged edge makes it distinctly different from the TamTam. Flat gongs are used today mainly in orchestras and for meditative sound play.

A completely different variant, on the other hand, is the hunchback gong, which plays an important role especially in the ritual field. The strongly pronounced central curvature of the hunchback gong makes for an imposing sound play, but one that vibrates less intensely than most flat gongs. We have taken a closer look at the different types of gongs in our blog post “What types of gongs are there?“Take a closer look and find out what the differences are between TamTam Gong and other types of gongs!